Snow Ice is flavored ice that is shaved into razor thin “ribbons” making it look like fluffy snow.  The ingredients are frozen into an ice block and then Snow Ice Shavers shave the ice block into tiny strips of “snow” that melt in your mouth!  You can then top your snow ice with delicious toppings like fresh fruit, chocolate sauce, tapioca pearls, popping boba, grass jelly and more! 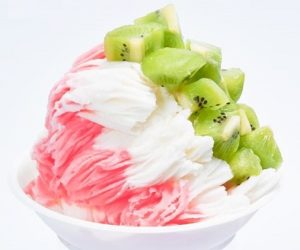 Snow Ice was invented in Taiwan and is also called Taiwanese Snow Ice or Xue Hua Bing (雪花冰).  Taiwanese Snow Ice is different than Snow Cones or Hawaiian Shaved Ice.  These varieties typically only use water to make their ice block and then use a fruit flavored syrup after the ice has been shaved.  Taiwanese Snow Ice puts their milk and other flavoring right into the ice block before freezing.  This makes sure that all of the snow ice is infused with flavor and  Taiwanese Snow Ice Shavers also uses a very sharp blade to shave the flavored ice really thin giving it a fluffy “snow like” consistency.

How do you make snow ice?

Most Taiwanese Snow Ice uses milk as a base instead of water.  You can then either add your own ingredients to it or use a pre-made powder.  Click here for our snow ice recipe!

Snow Ice Shavers use a stainless steel rotating drive to push the ice block against a razor blade.  The pressure combined with rotation against the razor blade is what creates the unique creamy snow ice “ribbons”.  You have the option of using a Single Serve or Large Block Snow Ice Shaver.

All of our Snow Ice Shavers have free shipping to the US, are NSF Certified and have a 1 year warranty with 5 years of video support. 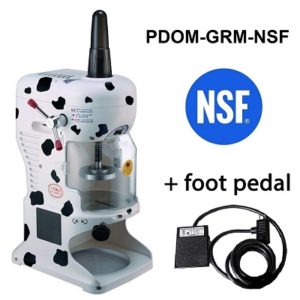 How to Freeze Snow Ice

Because snow ice is made with milk instead of water and is shaved razor thin, it needs to be cooled to a really low temperature for it to be shaved properly.  Large blocks usually use standard ice blocks that are 5.5″ x 5.5″ and require a special freezer with a minimum temperature of -25° C/-13° F.

Another option is to use a single serve snow ice machine.  Single Serve Shavers use smaller ice blocks that don’t require a special freezer. 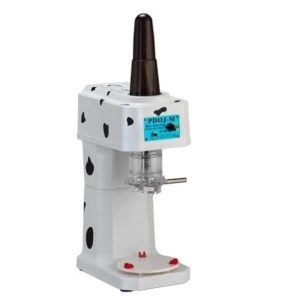 Where Was Snow Ice Invented?

Snow ice is rumored to have been invented at the famous Shilin Night Market in Taipei, Taiwan.  In Chinese Snow Ice is called Xue Hua Bing 雪花冰, which literally means snowflake ice.  Snow Ice has been steadily growing in popularity throughout the world.

Most people are familiar with Snow Cones or Hawaiian Shaved Ice but Taiwanese Snow Ice is a whole new way to cool off on a hot summer day. Taiwanese Snow Ice uses a very sharp blade to shave the flavored ice really thin and it’s called snow ice because of it’s fluffy consistency.

Snow Ice has been described as a cross between ice cream and traditional snow cones and desserts.  The creamy ribbons of snow give this dessert a unique appearance and texture.  Many restaurant and drink shop owners have been adding this dessert to their menus which can provide another revenue stream and provide your customers with more delicious options.  It is also possible to build a business all around snow ice like Ice Monster and the single serve models are light and portable for fairs and festivals.

Sign up below to get our Free Snow Ice Guide so you can start making snow ice like a pro!